As we read the passage today, we engage in advice regarding communication. The words were written to a group of believers in the first century but have value even today. First piece of advice is to be quick to listen. This indicates to us the importance of listening before beginning to speak. Defer to the other person to hear their information and/or perspective. Greek Stoic philosopher Epictetus said,” We have two ears and one mouth so that we can listen twice as much as we speak.” This is echoed in the advice from James which continues by saying we should be slow to speak.

The third piece of advice is to be slow to become angry. Anger does not fit what God wishes to see in human relationships. The usual outcome of anger is the expression of damaging words. Anger does not build up a relationship. While the emotion of anger is unavoidable at times, managing and controlling it is a valuable skill. Many difficult situations can be avoided if we do not rush to anger and the harsh words it produces.

Finally, the advice states to remove moral filth and evil from our thoughts and communication. Instead, we are to focus on the words planted in us by the Spirit. These are words which build one another up. These are words which communicate the love of God into our relationships. By focusing on and using these words, we save ourselves from destructive communication which destroys relationships.

38 As Jesus and his disciples were on their way, he came to a village where a woman named Martha opened her home to him. 39 She had a sister called Mary, who sat at the Lord’s feet listening to what he said. 40 But Martha was distracted by all the preparations that had to be made. She came to him and asked, “Lord, don’t you care that my sister has left me to do the work by myself? Tell her to help me!”

41 “Martha, Martha,” the Lord answered, “you are worried and upset about many things, 42 but few things are needed—or indeed only one. Mary has chosen what is better, and it will not be taken away from her.”

Hosting guests or family gatherings can be a stressful experience. As host, making sure all the details for making your guests comfortable and cared for can be overwhelming. Preparing as much in advance as possible helps to reduce your to-do list when your guests arrive. Even if you prepare though, once the guests do arrive, there is still plenty to be accomplished. A person can be so tied up in tasks and on edge with worry about something forgotten or checking on the needs of the guests that you get little or no time to spend with your guests.

As we read from Luke’s telling of the Gospel, we hear about Jesus, Martha, Mary and the close disciples. Jesus and the disciples are in the home of Mary and Martha. Mary sits at Jesus’s feet and listens to Jesus as he teaches. Martha is busy trying to be a good host by preparing food and other accommodations for the guests. Martha comes to Jesus frustrated because Mary is sitting instead of assisting her. She tries to get Jesus to instruct Mary to help her sister. Jesus responds that Marth is worried about too many details but Mary has chosen the only one which matters.

So often we are like Martha. If we had a guest of honor such as Jesus in our home, we would make every effort to be extremely accommodating. Instead of sitting so we could absorb all our guests have to offer, we would be wrapped up in detail so we could present a positive image. How many times do we let the opportunity to sit with the Lord pass us by because we are busy with life’s tasks? Jesus’s response to Martha reminds us to keep track of what is important. We must make time to be still with the Lord. We also must make time to be with the people in our lives. Those times are precious and will not always be available. Be wise like Mary.

I saw a person wearing a t-shirt which read, “The struggle is real.” After reading the words on the shirt, I began to ponder some questions. What is the struggle? Is it life? Is it a specific situation? Is it a project or task upon which effort is being made? Is it something spiritual? Is this in reference to an addiction? What exactly are we talking about here? Then I came to realize that the specifics are not what matters, what matters is the acknowledgment that for this person the struggle is real.

The truth is that all of us have struggles whether we declare it by wearing a t-shirt or if we keep them to ourselves. For some of us the struggles change over time. Others have a constant struggle like those dealing with addictions. There are times the struggle seems overwhelming. At different times we may even be able to manage the struggle and even overcome it. While facing whatever struggle is in our life, that struggle is completely real to us.

During his ministry, Jesus encountered many individuals who faced struggles. In the Bible, these struggles at times are verbalized in a spiritual sense using words which conjure up images of demons. An example of this is the man who is found naked in the graveyards outside of Gerasenes. Different stories of struggle are shared using words which create the idea of physical abnormalities. The man who was blind is an example of this imagery. In every one of the stories about Jesus encountering people with struggles, Jesus demonstrates a loving response. Jesus does not minimize their struggles but instead shows compassion, a willingness to listen, and provides for their needs. This example is one which can be very important as we strive to understand how to respond to the struggles of those around us.

Jesus also encountered struggles of his own. Stories of Jesus struggling to continuously minister to those around him are numerous throughout the Gospels. Jesus also struggles with the frustration of his message not being heard and understood by those with whom he speaks. The most poignant display of Jesus’ struggle is when he is in the olive trees on the Mount of Olives, the night of his arrest. The struggle is so intense that the author of Luke shares, “And being in anguish, he prayed more earnestly, and his sweat was like drops of blood falling to the ground.” (Luke 22:44) Again, Jesus gives us an example of what to do when our struggle seems so real, every time he would go to the Father in prayer. 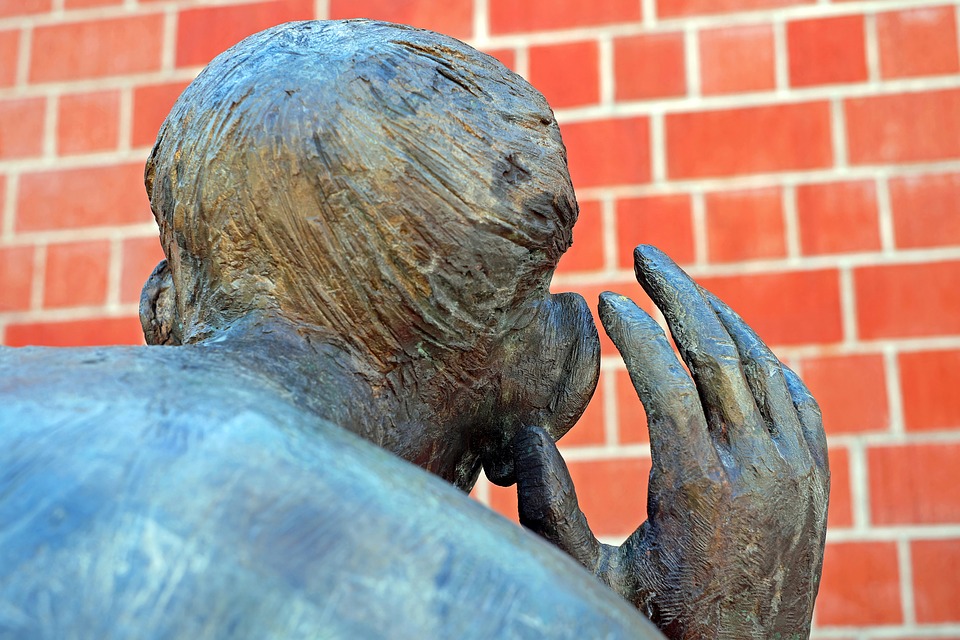 For nine years, starting in 2002, this was a question we heard on our televisions multiple times a day. The question was part of a commercial for one of the nation’s larger cellular service providers. A man would be on his phone in a variety of locations and would ask this question to whoever was on the other end. The point of the commercial was to state how wonderful the signal reception which this company provided was, even at the most remote locations.

Imagine if this question was not being asked as part of a television commercial but instead was a question which Jesus may be asking of you.

Last week, my husband and I were engaged in a discussion about words found in John 10:27. Here Jesus is talking with a group of Jews who are demanding a straightforward answer to their question of his status as Messiah. He is indicating to them that he has already answered that question for them, but they failed to listen and believe. The question of which arises for readers today is, “Am I listening for his voice?”

It is one thing when someone is physically present, or connected via technology. There may still be some challenges in listening for a person’s voice such as external noises or a signal problem, but barring these and similar challenges the ability to hear someone is a simple task. However, Jesus is now not physically alive on the earth as he was when these words were shared with the Jews. We may have a good argument in regard to the struggle with listening for his voice. Or do we?

One of the problems which seemed to be present during the dialogue with the Jews is the ability to hear versus the willingness to listen. The Jews did not state that they were not hearing what Jesus was sharing. Jesus did not say that he thought the Jews were not hearing. Yet, having the ability to hear does not mean that a person has chosen to listen. Listening requires the person to go beyond the sounds and make an effort toward understanding. It requires us to put effort into taking the sounds we hear and making sense of them. First, by shaping sounds into words and then by finding meaning in those words. Next, we have to take into account a whole list of elements such as context, nonverbal cues, and purpose. Our own assumptions and expectations also impact our listening. We tend to reject anything that causes conflict in our own understandings.

What about us then?

As mentioned above, we do not have the physical presence of Jesus which can create challenges in our listening. We hear what Jesus said as recorded by writers of Scripture. We hear the interpretations which Bible scholars, pastors, Sunday School teachers, and others have given concerning Jesus’ words. But are we listening?

Listening requires us first to put down our own assumptions and expectations. The Jews were getting hung up on the fact that Jesus was not fitting their assumptions and expectations of what the Messiah would be. Each of us have formed our opinions of the nature of Jesus (and God) so when we hear what Jesus may be saying, we want those ideas, thoughts, and words to fit into our already formed view of Jesus.

Listening requires taking the time and making the effort to locate Jesus’ voice. Each of us will do this differently. For some, this will require us to find a quiet space in our lives to listen for Jesus. For others, the need to surround ourselves with trusted spiritual advisers will open us to Jesus’ voice. Developing a trust will be necessary for others, trust that Jesus is still speaking in ways that do not require physical sounds or presence. This trust is closely linked to faith.

If Jesus were to ask you the question, “Can you hear me now?” Would he find you listening?